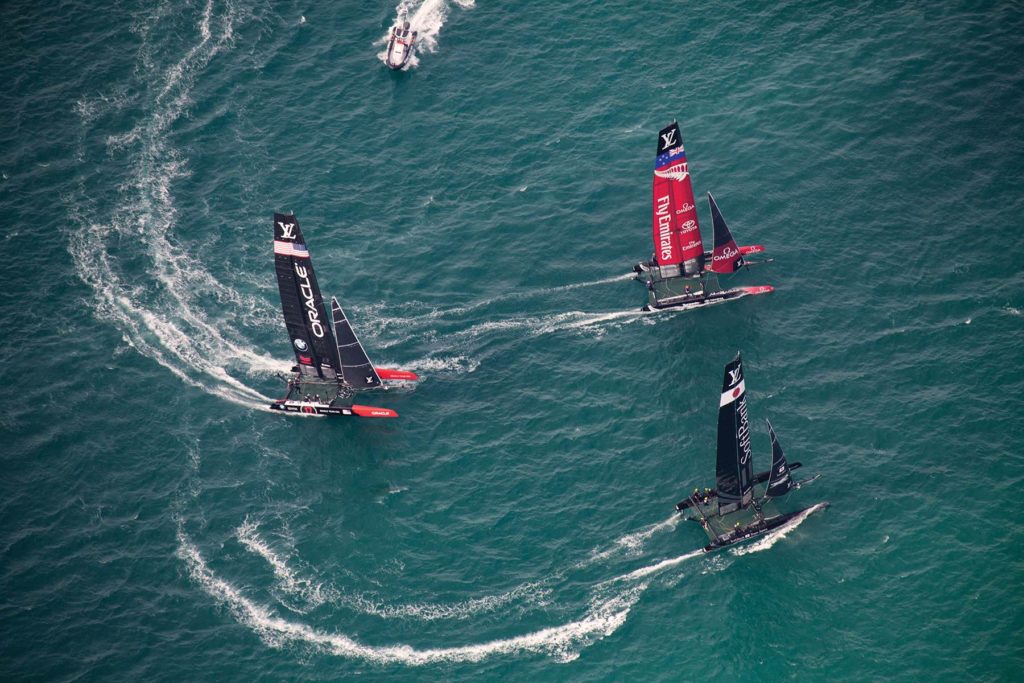 You’d be hard-pressed to spend any length of time in Bermuda without seeing hints of the major event this island will host in 2017.

Race teams mingle at island restaurants as foiling catamarans zip with impressive speed in the waters off the Royal Naval Dockyard, where nine acres of land are being infilled to serve as the heart of the event’s operations. The major event, of course, is the 35th America’s Cup. The oldest trophy in international sports, this sailing competition is exemplified by its ethos: “There is no second.” The America’s Cup is all about winning, and six international teams have converged in Bermuda to try to do just that.

Teams from New Zealand, the UK, Japan, Sweden, France, and the United States, whose Oracle Team came from behind to win the 34th America’s Cup in San Francisco in 2013, are taking up residence in Bermuda to train daily in their quest for the trophy.

“We already have three of the six teams residing in Bermuda, and today you can see five sports boats practicing daily in the Great Sound,” America’s Cup Bermuda CEO Mike Winfield said in an interview more than a year prior to the event’s kickoff on May 26, 2017. “If you’re coming to Bermuda today, you’ll be able to see these boats, which are quite extraordinary, as you’re catching the ferry from the Dockyard, walking along the Railway Trail, or from the Dockyard itself. The boats travel at huge speeds as they practice and perfect their crewmanship.”

By December 2016, five of the six teams’ Bermuda home bases will be constructed, and by January 2017, five of the teams’ foiling catamarans that they’ll sail in the America’s Cup race will have arrived in Bermuda. Approximately 200 team members and their families are making Bermuda their home in anticipation of the prestigious competition. In addition to the infusion of millions of dollars into the island’s economy, the 35th America’s Cup has brought a kind of fervor to Bermuda that’s contagious.

“Visitors today can’t help but be aware of this extraordinary energy that’s transcending Bermuda,” says Mike. “Bermuda is clearly feeling this energy and its impacts across the community; builders, taxi drivers, vendors, retailers, and in fact most aspects of Bermuda are feeling the positive impact of the America’s Cup.”

In addition to providing a stunning backdrop for the race, the nature of Bermuda’s landscape will allow spectators a closer view of the action than what’s been offered in the past. Several events will run in conjunction with the America’s Cup, including J-Class racing, a superyacht regatta, and the Red Bull Youth America’s Cup. There will likely also be opportunities to meet the America’s Cup teams, concerts, and other events, which were not finalized as of this magazine’s May 2016 printing.

“It’s not just America’s Cup; it’s a celebration of sail,” says Mike. “This is a very fast and very modern event, the likes of which I don’t think we’ve seen anywhere else in the world.”

To learn more about the America’s Cup, including how to purchase tickets to get out on the race course during the competition, visit www.acbda.bm or www.americascup.com.