Back in 2006, Caymanian filmmaker Frank E. Flowers released his first feature film Haven, a dramatic thriller filmed entirely in Cayman, and featuring an impressive ensemble cast. Ten years and a host of industry nominations and awards later, three of the film’s stars – Zoe Saldana (Avatar, Guardians of the Galaxy, Star Trek), Anthony Mackie (8-Mile, Captain America: Civil War, Triple 9) and Victor Rasuk (Godzilla, 50 Shades of Grey) – are returning to Cayman for the 2016 CayFilm Cayman International Film Festival where Frank E. will be debuting a special director’s cut of the movie never seen before in Cayman and focusing on the local characters and their journeys. 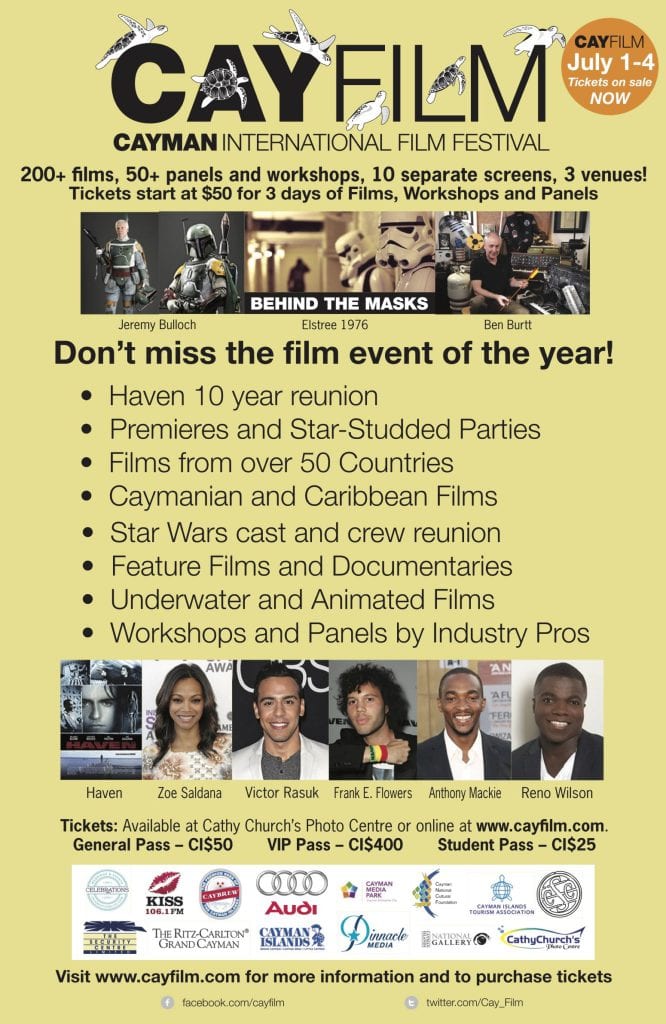 Festival Director Tony Mark hopes that the reunion and special screening of the movie will inspire more young Caymanians to get involved with film as well as draw attention to the need for the CayFilm Cayman Media Academy to help train up and coming filmmakers locally.

“The movie Haven is an important part of the Cayman film community, and we are so honoured and excited that Frank E. will be sharing his director’s cut with us,” said CayFilm Festival Director Tony Mark. “Haven and Frank E. himself has inspired an entire generation of young Caymanian filmmakers, and we are looking forward to welcoming him and the cast to the Festival.”

While here, Saldana, Mackie and Rasuk will participate in a question and answer session along with Frank E. and attend the VIP gala events.

Other highlights of the Festival include the Star Wars cast and crew reunion, the Young Image Makers Awards ceremony and the 48-Hour Film Project where filmmakers from all over Cayman compete to see who can make the best short film in only 48 hours.

CayFilm Cayman International Film Festival is an annual multi-day spectacular event designed to create new interest and excitement about the Cayman Islands as a world-class filming destination. Included in the festival will be daily film screenings, question and answer sessions with filmmakers, panel discussions, workshops, exclusive premiere screenings and two celebrity gala events. It is our vision to open up the Cayman Islands to the film industry around the world whilst opening up the world to Cayman’s young and aspiring filmmakers.

The Festival team are also working to develop the Cayman Media Academy (CMA) under the CayFilm umbrella to educate Cayman’s youth by offering classes and qualifications relating to different career fields within the industry. This will be run throughout the year with the eventual goal of having a full-time Associate’s degree programme available at our own physical location. Young children will have their own specially designed programmes to inspire and give confidence about their own unique abilities as filmmakers.