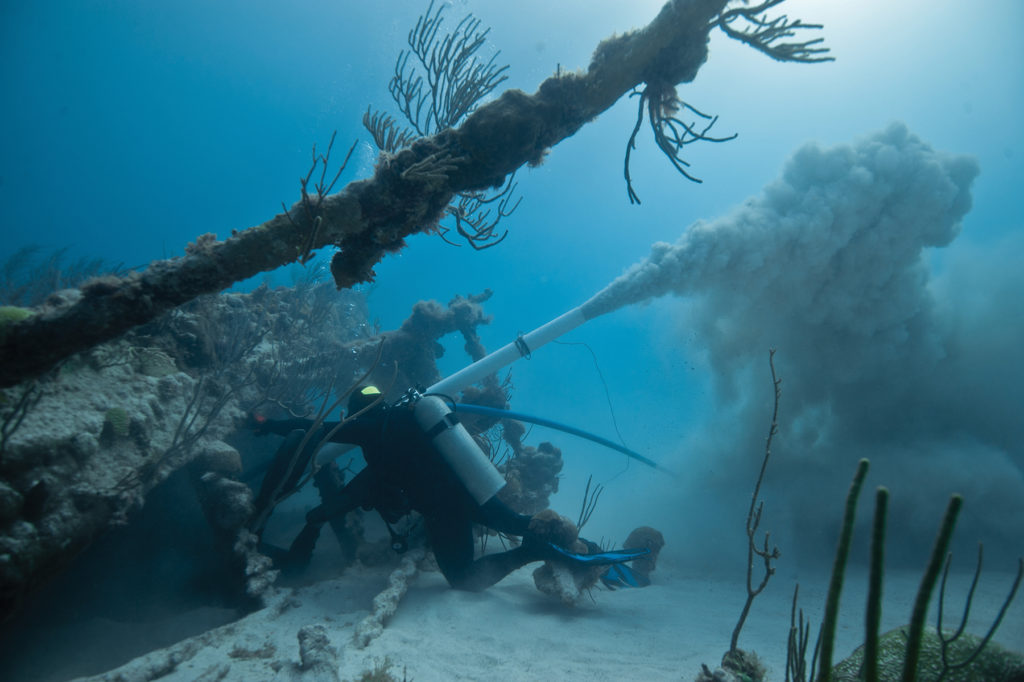 Bermuda’s mid-Atlantic location and fringing reefs have conspired to sink hundreds of ships over the past several centuries. The island’s use as a navigational tool during the 15th and 16th centuries was tenuous at best.

“On the route back to Europe from the new world, ships would try to sight Bermuda, which told them how much further they had to go,” says Dr. Philippe Rouja, Bermuda’s Custodian of Historic Wrecks. “The problem is if you came at Bermuda on the western or northern end, the reef extends almost eight miles offshore so by the time you saw the island, you were already hitting the reef.”

Bermuda also played an important role in the American Revolutionary War by delivering gunpowder to the Patriots and during the American Civil War, when the British island served as a hub for goods making their way through the blockade to the Confederate South. It was during the Civil War era that perhaps one of the most recognized ships that lays on Bermuda’s sea floor sank. On September 13, 1864, as the 225-foot, 207-ton steamer Mary-Celestia left Bermuda laden with cargo destined for the Carolinas, she sank only 800 meters from shore. The ship’s loss was confounding; not only was she piloted by an experienced Bermudian, she departed on a calm, flat day. The mystery of her sinking, however, has been overshadowed by the incredible time capsule that was discovered by Philippe and his team in 2011 after a series of winter storms moved six feet of sand off the wreck.

“I saw parts of the ship that I never knew even existed,” Philippe says of the discovery. “Hidden deep in the bow, akin to the back corner of a kitchen cabinet, we found luxury goods.”

At the time of the discovery, the Mary-Celestia had already served as a well-known dive site for decades. Located just five minutes from shore in 55 feet of crystal clear Bermuda water, the wreck is one of the most intact and best preserved Civil War blockade runners, giving divers the opportunity to easily interact with an authentic, exciting piece of world history. The discovery of the luxury goods, which included wine, hairbrushes, and a bottle of perfume, only furthered the wreck’s intrigue. A series of letters written by South Carolina engineer Charles Middleton, who was on the Mary-Celestia at the time of its sinking, indicated he’d lost the luxury goods he was bringing for his wife, hinting at the possibility that it was his cache of items that had been discovered.

The artifacts and the personal spin enrich the Mary-Celestia’s story, the basis of a documentary film by LookBermuda | LookFilms, a co-production with South Carolina PBS station SCETV for American Public Television and International Broadcast.

While the Mary-Celestia’s story is undoubtedly compelling, she is just one part of the framework that makes diving in Bermuda so beguiling. There are 50 wrecks easily accessible to divers from Bermuda, and another 100 in the surrounding waters. They represent the embodiment of what makes Bermuda unique. History meets biodiversity in these underwater artifacts, where coral and sea life thrive.

“Just adjacent to the Mary-Celestia is a spawning aggregation of four different species of parrotfish, so you can be diving the wreck and just watching these parrotfish stream by you like morning traffic on a highway,” says Philippe. “It’s also close to a whale migration route, so there will be days when a diver is on the wreck and not one kilometer away, whales are going by. You get to experience these two worlds side by side.”

“This incredible synchronicity of historical story and value that you can approach and be a part of is totally matched by this incredible ecosystem, and we’ve managed to keep both in pristine condition,” Philippe continues. “The combination is really quite magical.”