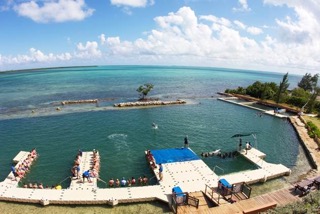 Grand Cayman-Cayman Islands, December 07, 2015 –On Friday December 4th Dolphin Discovery Cayman completed the acquisition of Dolphin Cove Cayman, a beautiful dolphinarium that began operations in 2008 which is visited by locals and tourist, wishing to have the unique experience of swimming with dolphins. In addition to the dolphin interactive program Dolphin Cove also offers a “Nature Trail”, which is a tour that guest can see and learn about exotic tropical birds including macaws, cockatoos and parakeets, as well as visit the world famous “Stingray City,” in boats that conveniently depart from their private dock at Dolphin Cove.

“We are really proud to add Dolphin Cove Cayman, as a part of offing which will allow us consolidate our service in one of the most beautiful and visited places in the Caribbean: The Cayman Islands”, said Eduardo Albor, Dolphin Discovery President and CEO.

Dolphin Discovery has taken over operational responsibilities as of Saturday Dec 5th and will be reviewing the operation over the next few weeks. Dolphin Cove does not expect layoffs of any local employees due to the ownership change.

Meanwhile Stafford Burrowes, Dolphin Cove Cayman Founder commented: “Dolphin Cove started operations in Ocho Rios Jamaica in 2001, and we started in Cayman in 2008 because we knew that this destination had great potential in the tourism sector and that the dolphinarium would be a key attraction for their visitors. Last month, we sold a majority stake of Dolphin Cove Jamaica to Dolphin Discovery and we then took the decision to sell, Dolphin Cove Cayman, to Dolphin Discovery Cayman. This acquisition will allow consolidation of this dolphinarium as part of the leading company in swimming with dolphins programs worldwide.”

With more than 40 employees, most of them locals, Dolphin Cove Cayman is located in Grand Cayman Island in a natural environment facing the ocean and is home of 6 dolphins. From 2008 to day, the dolphinarium have received more than 300,000 visitors.

For more than 21 years, Dolphin Discovery has contributed to the research and conservation of marine mammal animals creating love bonds and respect through the experience of interactions in unique habitats around the world. Millions of visitors have lived the experience of a lifetime in the 24 dolphinariums part of the Dolphin Discovery world, located in Mexico, Anguilla, Tortola, Grand Cayman, Dominican Republic, Saint Kitts, USA, Italy and Jamaica, where more than 250 marine mammals live protected by their veterinarians and trainers.