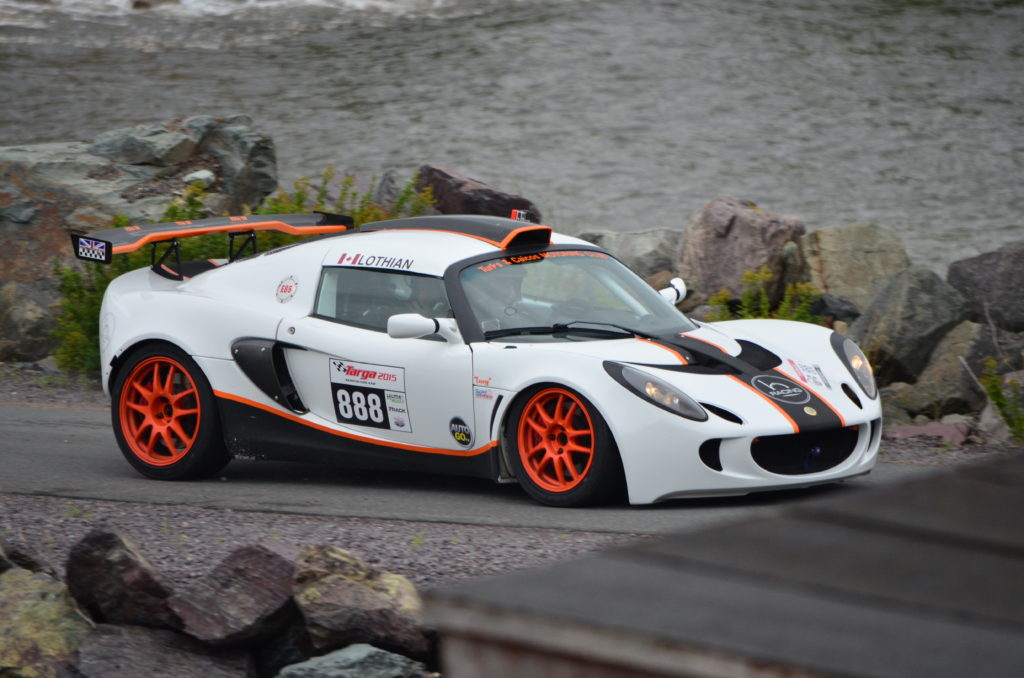 Close to 50 entrants compete in various classes at the annual event. The Targa rules are simple; participants must beat the benchmark time set for each rally stage or take time penalties. The driver and team with the least amount of time penalties at the end of the five days win the race.

The base times set for the various “special stages” (closed sections of public roads for the timed race) become increasingly harder as the week goes on and teams start to be separated by the amount of time penalties.

At this year’s event Hartling’s co-driver was his friend of 35 years, David Lothian. Hartling’s support crew was lead by Lotus experts, Yesteryear Motorsports from Maryland, USA. Yesteryear are credited for building some of the fastest Lotus track cark configurations in USA competition.

The challenge for Yesteryear was to apply their experience to building a rally endurance car versus a track car that sees much less vigorous conditions. “The demands put on a rally car over the five days of road rally racing are completely different than a track car that runs on a perfect surface and for shorter periods of time,” said Jaime Goffaux , lead engineer of Yesteryear Motorsports. “ We sadly continue to work our way through the cars and find out the weak spots that won’t show under normal testing. “

Hartling’s white supercharged Lotus Exige was joined in the race by Scott Knott’s red Lotus Elise. Knott is another veteran motorsport participant. Both teams were hoping this was the year they could prove that the Lotus vehicles were not only the fastest cars in the field but also capable of being able to endure what five days of racing on rough rugged roads could produce.

The normal car of choice for rally racing in the Modern and Open class are the Subaru WRX STI, the Mitsubishi EVO or BMW M3. Hartling’s dream is to run the Lotus into a full first place finish.

That dream looked very real as Hartling and Lothian lead the entire week in first place, not only in their Modern division but also in total points overall. By day five (Friday) Hartling had taken only nine seconds in total penalties, which gave him a commanding 40-second lead over his nearest competitor.

With the red Lotus having some mechanical issues that caused it to miss a few stages and take large penalties, the white Lotus of the Hartling team was perfectly poised to not only take a coveted first place in the Modern class but to also beat all time standings including those of Canadian Rally Series driver Jean Luc Bergeron running his all wheel drive STI.

With less than a 15 kilometer stage to go in the race, Hartling heard a sickening sound develop in the rear of the car that instantly erupted into a grinding sound that meant the differential on the car could take no more and had shattered. It left Hartling no choice but to bring the car to rest on the roadside, unable to move.

“I was truly gutted,” says Hartling. “It was surreal that after five full days of racing and driving the car over 2000 kilometers that we could lose everything with less than 15 kilometers to go.“ He further adds, “The car performed flawlessly all week and we really thought this was our year to take an overall win.”

In the sportsman-like manner that the Turks and Caicos team are known for, Hartling had the car dragged to the finish line where he and his co-driver pushed it over the finish line for a ceremonial finish where the team was applauded by spectators and competitors alike.

One very positive end to the story was that the organizers and competitors of Targa were so impressed with the efforts and support of the event, that Hartling and his team were given the prestigious “Spirit of Targa Award” recognizing outstanding determination and competitive spirit.

“While we all are still in disbelief over the reality that the car failed just before achieving the first place it deserves, our team is so proud of receiving this coveted award and proving how competitive we are at this event” said Joan Hagan who is a key organizer for H Racing and the Turks and Caicos Motoring Club.

“ We cannot control that gear failure, it needs to be behind us and we have already started preparation for next year to make sure the win comes home to TCI as it deserves,” said Hartling.

For more information on the Targa event, visit www.targanewfoundland.com.