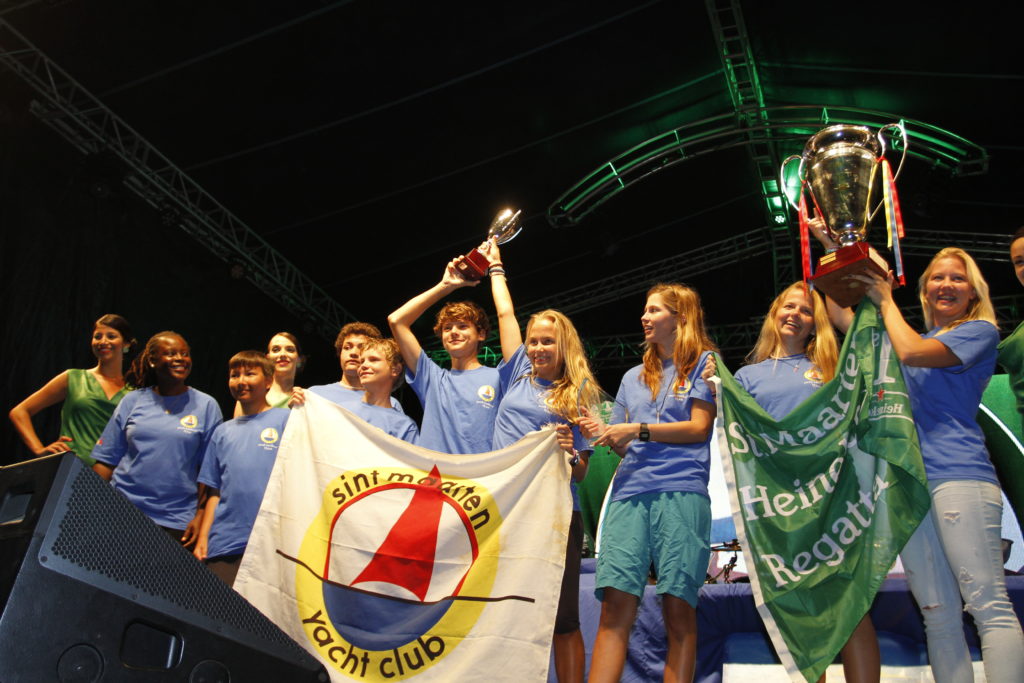 St. Maarten, Caribbean-March 6-9, 2014.
The 34th Annual St. Maarten Heineken regatta awards ceremony on Kim Sha Beach. Regatta is a yacht race on the island of Sint Maarten, held every year. The Regatta is both named after its location and sponsor, the island of Sint Maarten and Heineken. Which its slogan of ‘Serious Fun’ it represent the two sides of sailing in the Caribbean. The racing and parties are of course legendary, but the overall atmosphere is equally appealing.
Photo credit: Bob Grieser/OUTSIDEIMAGES.COM
Outside Images Photo Agency

The St Maarten Heineken Regatta attracts sailing stars from around the world, the big guns, Americas Cup Sailors, Volvo Ocean race crews, transatlantic record-breakers and Olympic stars, but this year the spotlight switched from the high-fliers to three teams of local youngsters who out-sailed them all.

It’s not an easy thing to do, steal the limelight at a top-class regatta, but when you are young, inexperienced and win, then you had better believe the focus will be on you.

This is what happened at the 2014 Heineken Regatta when three teams of youngsters took on the big guys with sensational results. Not only did one team win their division, CSA 9 (Caribbean Sailing Association) outright, the other two teams finished second and fifth.

The awards ceremony held on Kim Sha Beach was already abuzz with excitement by the time the MC called the winners of Division 9 to come to the stage and by the time he announced second place, he was having difficulty being heard over the cheers of the crowd.

As the winning team bounded onto the stage, the place went wild. Such exuberance is rarely seen at regattas and the winners enjoyed, and deserved, each precious moment their hard earned victory gave them.

Who are these young racers who shook the sailing establishment to the core? And how did it come about?

The winners, the St Maarten Yacht Club Sailing Team, comprised youngsters from the St Maarten Yacht Club (SMYC) Youth Sailing Program. No surprises there, you say, but what is worthy of note is that the youth sailing program teaches youngsters to sail dinghies, not racing yachts. How did they make the transition from sailing small boats on the lagoon to an ocean going yacht?

Credit for their outstanding performance is shared between several dedicated individuals but ultimately it’s down to one man: The coach. Yacht Cub youth sailing instructor and expert coach Neil Maher, fits the bill with splendid results.

Being well trained is the first step, now you need a yacht to race on. This was provided by Mirian Ebbers and Pieter Bakker, both members of the SMYC, and Mirian serves as Vice Commodore. Together, Mirian and Pieter own a charter boat/sailing holiday business and they offered the yacht club sailing team use of a 30ft Beneteau First Class on which to train and enter the regatta. 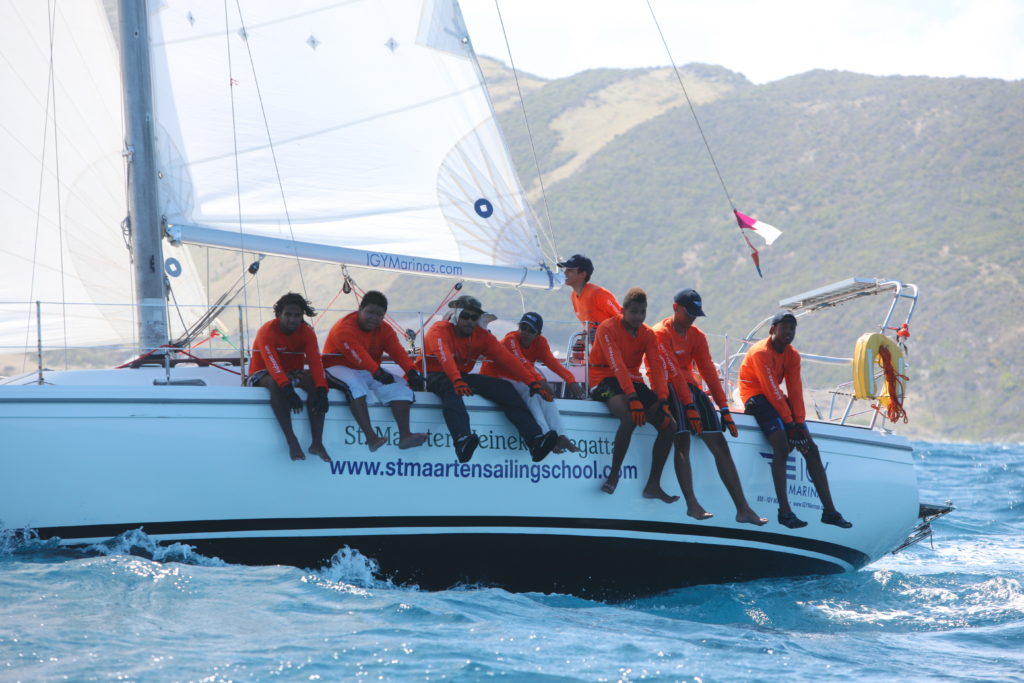 The other two teams have an even more remarkable story as the crews hailed from local schools where sailing certainly is not part of the curriculum. The St Maarten Sailing School Team along with the MPC (Milton Peters College) Second Racing Team learned their skills courtesy of Garth Steyn, proprietor of the St Maarten Sailing School, and his dedicated team of instructors. In turn, they received support from the Saint Maarten Marine Trades Association (SMMTA) and teachers from participating schools.

Garth is the founder of the ‘Build Your Future’ program, an initiative that takes boatbuilding into schools in order to interest students in pursuing a career in the marine industry. A successful regatta campaign was a spin-off that took everyone by surprise. 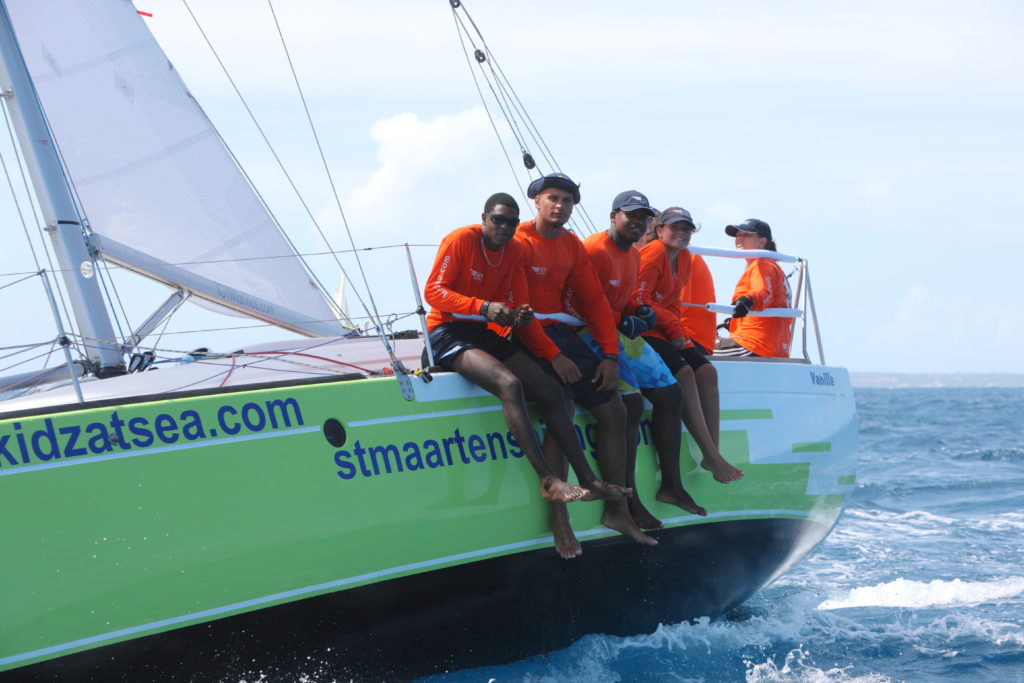 For the St Maarten Yacht Club Sailing Team, their first place trophy was only one of the prizes given to them at the awards ceremony. They also won the St Maarten Yacht Club Cup for the Most Worthy Performance of the final day, and the St. Maarten Local Youth Challenge Cup, which was presented by Lorraine Talmi of the SMMTA. This trophy was created to award local youngsters who are involved in sailing and to stimulate more interest in the sport from the local community.

Thanks to the dedication of their mentors, the financial support of local businesses and, above all, the gutsy determination of the teams, the future is bright for young and talented St Maarten sailors.