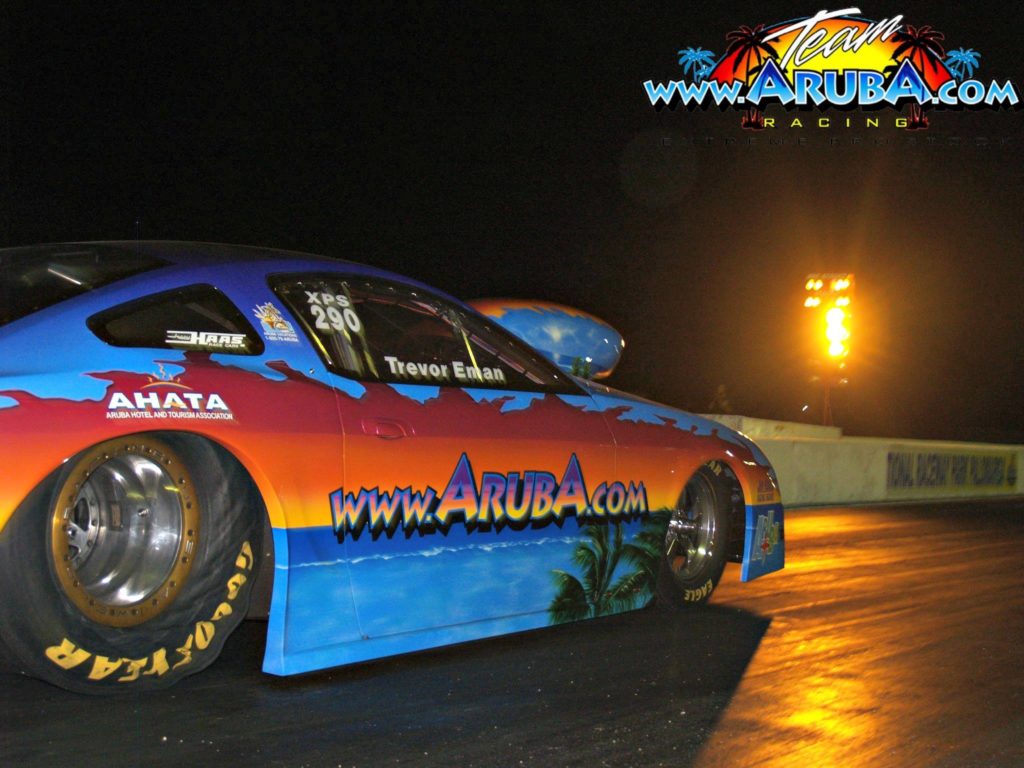 The final event on the IHRA Drag Racing Series 2016 Tour was the team’s chance to make history as the first professional team from Aruba to win an international drag racing championship. Eman was only three points behind points leader and reigning champion, Cary Goforth. Whoever had the best showing would be crowned the 2016 IHRA Pro Stock World Champion.

“We made good, fast runs in testing which led us into a good qualifying run on Friday night, putting us in the number one spot with a 6.38 second run,” Eman added. “The pressure was on as this was a make it or break it weekend in terms of winning the championship. Our team was up for the challenge.”

Rain entered the picture and professional teams would only be given one final qualifying session. In that session JR Carr edged out the Aruba.com Mustang for the top spot, but the team was still in a good position heading into eliminations.

Unfortunately, qualifying positions set the ladder in the advantage of points leader, Cary Goforth. He would face teammate John DeFlorian first round. If Eman and Goforth both won first round, they would meet in the semi finals. Eman and team did their job, ousting Matt Bertsch’s 6.43 with a solid 6.36 run. What happened during the Goforth/DeFlorian matchup, however, put a sour note on the entire year’s efforts.

“The disheartening part of the weekend instantly started when it appears that John took a dive in the first round against Cary, while Cary was not able to make a full pass down the track,” Eman explained. “DeFlorian left before the tree was activated, giving Cary the win light, even though he aborted the pass.”

Had DeFlorian beat Goforth, the championship would have been Eman’s who out-qualified Goforth that weekend and racked up enough points with the first round win to clinch the title, if Goforth had lost. Although Goforth eased his way past first round, Eman had one final chance to earn the championship title when they faced off in what would be the championship-deciding round. Unfortunately for the team from ‘The One Happy Island’, Goforth put down a 6.31 to take the win over Eman’s 6.34.

“We don’t know if Cary and his teammates worked qualifying so that they would face each other in the first round, but it did turn out that way. The matchup between him and DeFlorian looked like a very obvious dive. Even though we still had a chance to take Cary out in the semis, having a teammate lay down to keep Cary in first place took the wind out of our sails a bit.

“Although we were not able to take home the number one in the championship, we are very proud to have achieved our second place finish. It took a well-funded three car team to take down the one car team from Aruba. We keep our chins high because we know that we legitimately won the first round of eliminations, but also legitimately lost in the semis. I cannot say so much for the winner of the championship.”

Despite the season’s end, Eman and his team have had a stellar year, consistently qualifying in the top five and going to three straight final rounds.

“We are very proud of our achievements this year, especially since we overcame great odds and difficulties throughout the season” Eman noted. “We’ve blown our motor twice this year, had a run in with the wall in Maryland, and, as always, traveled further than anyone to compete. But despite all of that, we accomplished the number two spot in the championship by putting up a good and fair fight in every round of competition.

“The Pro Stock class has always been special because of its reputation of high standard racing, where your competitors will make you earn each and every win, but the way things resulted this past weekend just left a bad taste in my mouth,” he emphasized. “Never did we think the championship could be taken away in such a fashion. I cannot imagine those responsible for making that call can feel that they truly earned this victory.

“Furthermore, I believe the way this played out puts a damper on the Mountain Motor Pro Stock industry as a whole. It does not just affect the team drivers, but also the owners, crew members, engine builders and chassis builders involved. We should all working together to strengthen this class and continue to see it grow as a fan favorite. Instances like this selfishly only benefit one person while taking away from what many of us are working toward. I expected more from the Goforth Racing/Black Diamond camp.

“I hope, for the future of the class, better leadership will emerge to uphold the reputation and legacy of Mountain Motor Pro Stock.”

While Eman will not be hailed as the 2016 IHRA Pro Stock World Champion, he realizes that his team is championship caliber, nonetheless.

“I consider my teammates the champions of 2016. They worked very hard and have no control of what another team does, nor do they have control over how I end up driving the car, so if I sometimes screw up, they still gave it their all. In my book, my dad, John, Doug, Bruce, and Henito are the 2016 IHRA Pro Stock Champions.”