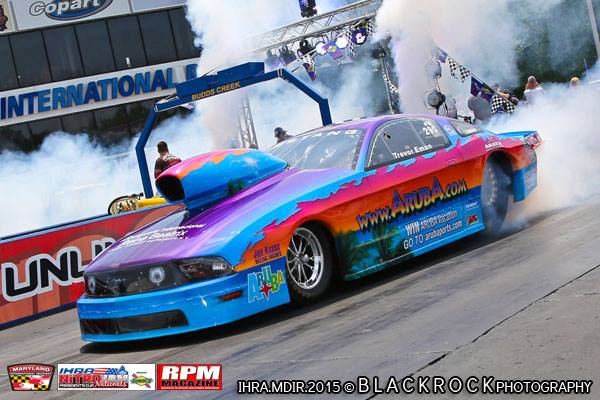 MEMPHIS, Tn. (October 14, 2015): With the IHRA World Finals in the books, Team Aruba puts the cap on another successful year with their 2011 Aruba.com Pro Stock Mustang. They finished seventh in national points standings overall, quite an accomplishment in the extremely tough Pro Stock division.

As car counts continue to increase in IHRA Pro Stock, each race qualifying becomes more of a challenge. Team Aruba earned their spot in the World Finals with an impressive 6.358 elapsed time at over 222 miles per hour. “We had the privilege of qualifying and racing with the world’s best Pro Stock racers,” stated Trevor Eman, driver of the Aruba.com Mustang. “IHRA Pro Stock has a nice, diversified group of racers from the U.S. and Canada and also with us from Aruba in there. It means a great deal to us just to be able to compete with such a talented group. The racing competition was very tough this year, but it’s what racers have come to expect from each other. and we couldn’t be happier to do this anywhere other than on the IHRA quarter mile. At times certain races did not go as we would have wanted, but in between we had some races we were very happy with, including our final round appearance in Bradenton, Florida.”

A major facet of the Team Aruba operation is promoting ‘The One Happy Island’ they call home. At each event Trevor and his team talk to fans and fellow racers about this paradise destination. Not only can they give first hand experience of Aruba, they help plan the perfect vacation through their travel partners.

“We are extremely proud to have represented our country, Aruba and our partners, www.Aruba.com and the Aruba Airport Authority in another successful year of racing, a successful year of getting to know new fans, and a successful year of getting more racers and fans to visit Aruba,” Eman continued. “We are also extremely proud of the hard work and efforts put out by our crew members. We have a great team in place with great chemistry. Aside from the fun of racing a vehicle at 220 miles per hour, the most fun is the time and laughs you get to spend with your crewmembers. We are lucky to have a good team in place.

“Jerry Haas built us a great car back into 2011, which is still going strong. Jerry has showed us pictures of the new model Mustang being built, but his shop built such a good car for us that it would be difficult to trade it in just yet. The power under the hood of the Aruba.com Mustang has been tremendous this year. Jon Kaase knows what he’s doing with these great big 820+ cubic inch motors when he builds them. We thank the entire gang at Jon Kaase Racing Engines for supplying us with a powerful engine. We look forward to them digging up some more HP’s for the 2016 season.”

With tens of thousands of miles under their belt this year alone, Team Aruba has earned a well-deserved break from travel and toil. The Mustang will remain at the team’s stateside base in South Carolina, while the Aruban team members head home for the winter.

“We’ll settle down now a little bit at the season ending, but plans are already falling into place for next season,” Eman expressed. “We are anxious to see what the 2016 IHRA race schedule is going to be like so we can start making our testing plans. On behalf of Team Aruba, we would like to congratulate the IHRA for a completed season, despite all the hardships with rain throughout the year and also all the 2015 champions.
We look forward to doing this again and more in the upcoming 2016 race season.”
Follow Team Aruba on Facebook and Twitter. Find race results, team updates, videos and photos. Also leave your comments to cheer on Team Aruba!

For more on your Aruba vacation visit www.Aruba.com and www.Destination-Magazines.com.