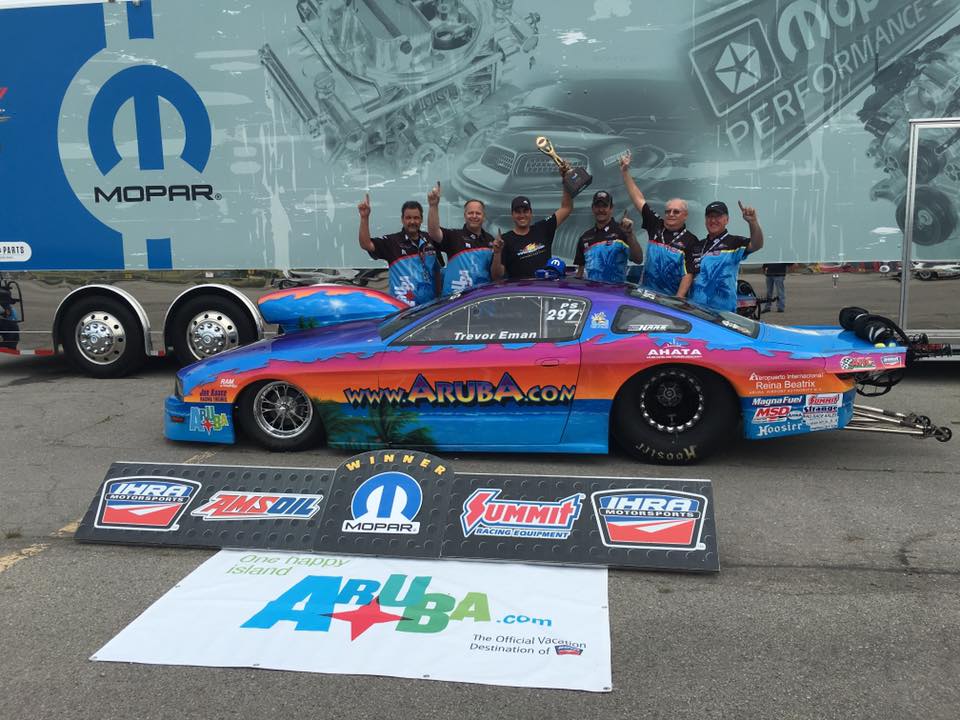 The last three events have equated to three final rounds for Team Aruba. While the team came heartwrenchingly close to its first ever IHRA Pro Stock win in its last two outings, it was the IHRA Canadian Nationals and Team Aruba’s third trip to the final round that would give the team, led by team owner, Ven Eman, and Aruba.com Mustang pilot, Trevor Eman, their first victory.

An elated Eman was thrilled to get the win for his hard working team and the country he represents:

“It’s very relieving to win an IHRA race finally. We’ve been after a win for a long time, and we have gotten close several times, but when the win doesn’t come, you feel as if your determination and patience is being tested. All the time traveling away from home and on the road to make it to a final round and not win, blow up engines, tear up a race car only makes the perseverance in continuing the stride and achieving the win so much more satisfying and finally relieving. As they say; ‘the monkey is now off our back.’”

Following a hectic week in which Team Aruba had to repair both its Jon Kaase Racing Engine and complete body work repairs to the colorful Aruba.com Mustang, the team was in a mad thrash simply to make it to the Canadian Nationals on time. Despite the fast and furious week, Eman and crew were able to regroup and focus on the task at hand. He qualified second for the eight car field with a 6.345 elapsed time. In the first round Eman took on fellow young gun racer, Matt Bertsch. Eman won the round on both ends of the track, with a better reaction time and then pto a posting a 6.32 to Bertsch’s 6.39. In the semi-finals, Eman took on local favorite Larry O’Brien. O’Brien ran into trouble early and Eman cruised to an easy victory, maintaining consistency with his reaction time and running a solid 6.399. In the finals, Eman faced JR Carr, who had taken out number one qualifier Cary Goforth the round before. Once again, Eman put together an incredible package, beating Carr off the line with a .027 reaction time, then running 6.411 to Carr’s 6.485 to charge commandingly to his first victory.

“I couldn’t be more proud of the team and happy to be part of such a nice group of guys,” Eman thanked. “Everybody, my dad, Doug, John, Bruce and Henito worked real hard to achieve the win this weekend. However, the hard work started last week already at the race in Maryland. When you think that all the mishaps put you down and demotivate you, all it did was motivate us all to get everything turned around. And that we did.

“Again, if not for Jon Kaase and the entire team at Jon Kaase Racing Engines, we wouldn’t have had our primary motor with us for this weekend. And if not for the repairs David Linder was able to make to the car after scrubbing the wall in Maryland, we would have had to use a couple of rolls of duct tape to mask off the damage. But David was able to get the car looking good the way it should have been.”

“With two races remaining this year, we have our focus completely on the championship. We know what it feels like now to win an IHRA Iron Man; we are determined to go after more. Especially with the fact that we are a serious contender for the Points Championship only drives this team harder at wanting to achieve that. We will be concentrating hard on that goal and together with the support from our partners, Aruba Tourism Authority and Aruba Airport Authority N.V., everyone back home in Aruba and great people in the racing industry like Jon Kaase Racing Engines, Jerry Haas Race Cars, Pat and the team at RAM Clutches, Penske Racing Shocks, David Linder and so many others, we feel we can certainly make it happen.”

Team Aruba will hold a celebratory open house Tuesday, June 28 at 5pm at their race shop in Union, S.C. located at 2334 Whitmire Hwy, Union, SC 29379. Local fans and media are invited to attend and learn more about Team Aruba, their island paradise home, and the IHRA Drag Racing Series.

For more on your Aruba vacation visit www.Aruba.com and www.airportaruba.com.